Copper has played an important role in cultivating the first civilizations. Copper still occupies an important function in modern technology; in fact, this element is essential to many of our biological functions. A brief investigation into the relationship between human civilization and copper shows how deeply intertwined the two are.

Since copper occurs naturally, it was an easy choice for early civilizations. The first use dates at least 10,000 years ago in the Middle East. A copper pendant from 8,700 BC was also found in Iraq. By the beginning of the Neolithic era (7500 BC), the people of the Anatolia were already cold working, annealing, smelting, and using the lost wax method to work with this fascinating metal. 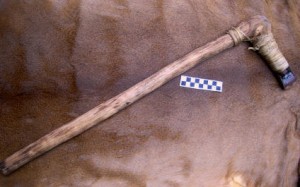 Ötze the Iceman’s axe had a copper tip, indicating he was probably a man of status.

Copper smelting was developed independently throughout the world at completely different times: China around 2800 BC, Central America around 600 AD, and West Africa about the 9th or 10th century. One of the most impressive anthropological finds was an ax with a copper head belonging to Ötzi the Iceman dated back to around 3300 BC.

The practice of copper smelting eventually developed into the discovery of bronze, which requires the alloying of this metal with tin. Sumerian and Egyptian bronze artifacts date back to 3000 BC, although the Bronze Age is said to have begun in Southeastern Europe around 3700-3300 BC.

Since tin and copper ores are relatively rare, not all cultures could create bronze; thus, bronze production blossomed when trade flourished. The Aegean Bronze again, for example, depended heavily on trade networks. For example, Cyprus would import tin and charcoal and mine its own copper to eventually produce bronze. Bronze products were then traded throughout the Mediterranean.

Next time, we will learn about the use of copper in the Middle Ages. Until then, keep recycling your wire! After all, copper is 100% recyclable. Call Gulf Coast Scrap Metal at to learn more about how you can make money by recycling metal.