The fall of the Roman Empire made copper currency essentially obsolete. In terms of weaponry and tools, iron replaced brass, thus reducing the value of copper. 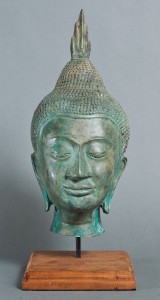 Copper metallurgy was extremely popular in South America, especially Peru, but it was generally used for decorative and artistic applications. Several copper burial ornaments have been uncovered in the region but mass copper production did not kick in until the 20th century. The Aztecs also dominated the copper metal working and frequently used an alloy of copper and gold called tumbaga.

In Europe, copper was also generally used in the arts. Statues and church monuments were frequently made out of brass. Bells were almost exclusively cast from bronze.

Bronze bells were not only common in Europe, but also in India, China and Japan. While the majority of statues in Southeast Asia are made of stone, some Buddha statues were cast from bronze and have been able to stand the test of time.

Bronze casting blossomed relatively late in West Africa; pieces dating back to the 12th century have been found from both the Benin and Ife kingdoms. Copper was generally used for sculptures and ornamentation. 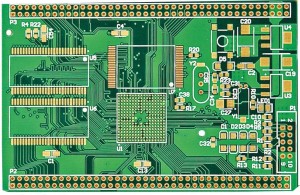 Copper is used in circuit boards.

As technology advanced, so did the uses of copper. Sweden produced the majority of the copper in Europe during the middle ages through to the last 20th century. In addition to sculptures, copper sheathing and plating was commonly used to line the hulls of boats; in fact, Christopher Columbus’s boats were plated with copper.

In 1949, flash smelting was invented, thereby reducing the cost and time required for smelting as a whole.

Nowadays, copper is used in wires, electronics, electrical motors, and nanotechnology due to its conductive and biostatic qualities. Its diverse applications make it one of the most valuable metals around.

So why would anyone want to take the time to recycle copper? Two reasons: its lucrative and its easy.

Copper can be found in so many household items that it is easy to collect. Any electrical construction site will have yards upon yards of excess copper wire. Simply pick it up and drop it off at a copper recycling center and you will walk away with a stack of cash!

Call Gulf Coast Scrap Metal to learn more about our pricing and our copper recycling process. We offer free wire stripping and job site pick up!